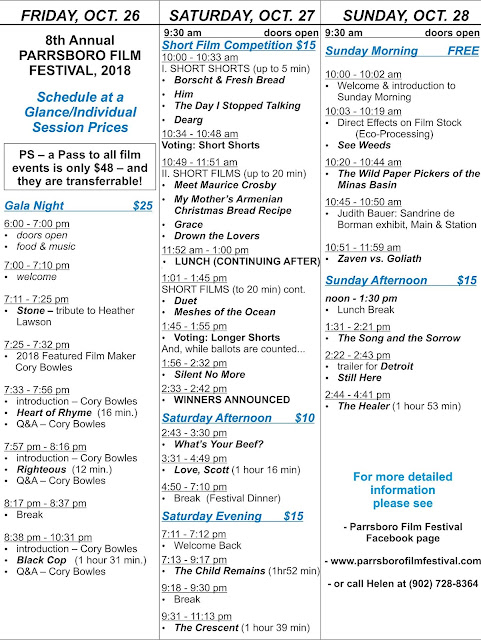 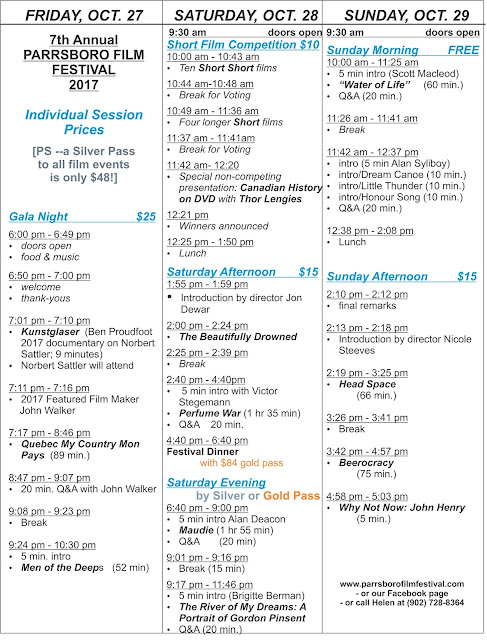 7:01- 7:10 Kunstglaser
2017 documentary
directed by Ben Proudfoot
8 minutes 56 seconds
We open this year's festival with a new short film from last year's Featured Film Maker, Ben Proudfoot, of Breakwater Studios (Halifax and Los Angeles). Kunstglaser is a vivid depiction of the life and work of Nova Scotia stained glass craftsman ("Kunstglaser") Norbert Sattler, who will be at the festival tonight.

9:24 - 10:03 pm Men of the Deeps
2003 documentary
written & directed by John Walker
52 minutes
A group of former coal miners, all members of Cape Breton's Men of the Deeps chorus, reflect on the closure of their mine and the effect on their community. Although made over a decade ago, this film is still timely as the mine in question (Donkin) reopened this year.

Saturday Morning Short Film Competition (see details of the films below)
(description of all 14 films, plus ballots, are in your program; we will collect the ballots and announce the winners before lunchtime)

11:42 am - 12:20 pm
Special non-competing presentation [while the votes are counted].
Thor Lengies will show  part of his series Canadian History on DVD (The Battle of the Gulf of St. Lawrence and the Oil Crisis of 1942), followed by a Question & Answer session.

2:00 - 2:24 pm
The Beautifully Drowned
2017 drama/fantasy
written and directed by Jon Dewar
23 minutes 55 seconds
A haunting Maritime fantasy about an unhappy wife, who longs for her husband to drown at sea.

2:40 - 4:40 pm
Perfume War
2016 documentary/biography/news
directed by Mike Melski
written by Mike Melski and Barb Stegemann
1 hour 35 minutes
One of our most-requested films, this biography/war drama covers the true story of a woman who won't give up when her best friend is struck in the head by a Taliban axe. There will be an introduction from cinematographer Victor Stegemann and time for Questions & Answers afterward.

Saturday Evening
**currently by passes only; rush tickets may be available but seats are limited**
6:40 - 9:00 pm
Our most-requested film (ever):
Maudie
2016 drama/biography
directed by Aisling Walsh
written by Sherry White
1 hour 55 minutes
Maud Lewis works as a housekeeper ... and fills her employer's tiny house with her vivid paintings. Art expert Alan Deacon, who advised the film makers, will introduce the film. There will be time for Questions & Answers afterward.

9:17 - 11:40 pm
The River of My Dreams: A Portrait of Gordon Pinsent
2016 biography/documentary
directed by Brigitte Berman
1 hour 44 minutes
Presented by the director, who will be available afterward for Questions & Answers.

Sunday Morning
Free to all, ** we advise pass holders to come early to claim their seats for this session.**

10:00 - 11:25 am
The Water of Life
completed in 2015
directed & animated by Scott MacLeod
written & narrated by Mike Burns
Four short tales from Canada's history, each from a different speaker, woven into a single hour-long film.
Presented by the director, who will be available afterward for Questions & Answers.

11:42 am - 12:37 pm
Three short films presented by Mi'kmaq artist Alan Syliboy. Presented by the director, who will be available afterward for Questions & Answers.

2:19 - 3:25 pm
Head Space
2016 dark comedy
written and directed by Nicole Steeves
Floyd Smith is an agoraphobic too frightened even to open his door to strangers ... but he has been summoned for jury duty.

3:42 - 4:57 pm
Beerocracy
2017 documentary
directed by Shauna Chase and Alex Vietinghoff
An independent film about the potential of the craft brewing industry to reinvigorate New Brunswick's economy, if archaic regulations do not keep the industry from growing.

4:58 - 5:03
Why Not Now: John Henry
2017 documentary
directed by Ben Proudfoot.
A docubiopic of young Harlem entrepreneur John Henry, who asked "Why not now?" and went from doorman to dry cleaner to dealmaker.


Details of Films in the Short Film Competition
Saturday, October 28, beginning 10:00 am

1. Short Shorts
(no more than 5 minutes)

iv.    We Watched the Clouds Form Shapes
2016   written and directed by Israel Ekanem    4 minutes 6 seconds
- a couple spend the day together

v.     Cut
2017   written and directed by Taylor Olson    4 minutes 30 seconds
- Tommy explains what he found when he came home after a late night working

vii.    I Love You More
2017   written and directed by Kevin Hartford    5 minutes
- a couple compete to prove which one loves the other more

viii.   Missing Women
2016   written and directed by Anna Quon    5 minutes
- Based on a poem, this film uses original art with collages to illustrate how women, and their names have gone missing.

ix.    Perfectly Sane
2017   writer: Taylor Olson, directors: Koumbie/Taylor Olson    5 minutes
- A man with bi-polar disorder struggles to understand himself and whether or not he needs his medication

ii.    Play Rewind Play
2016   written/directed by Stephanie Clattenburg   10 minutes 47 seconds
- in a near future, when time travel is common, a young woman spends her days revisiting one memory

iv.   Suzanne Gauthier: One thing leads to another
2017   written and directed by Ariella Pahlke     15 minutes
- blending autobiography, landscape and culture, the life and work of artist
Suzanne Gauthier, woven into a poetic narrative

2016
Here is the 2016 schedule with ticket price information. You can find details about each film or event below this chart. 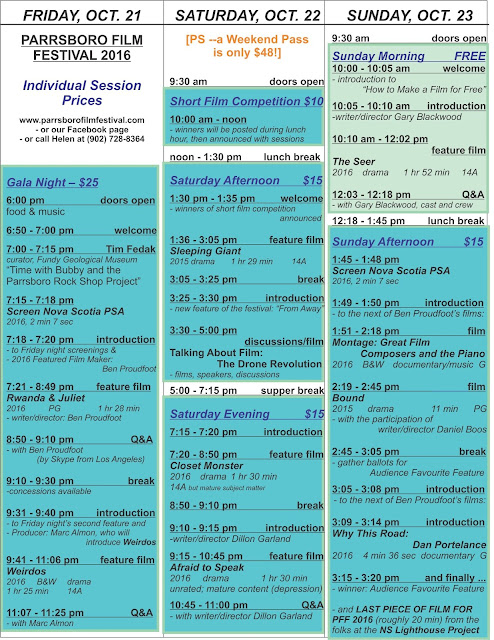 WINNERS WILL BE POSTED DURING LUNCH HOUR, THEN ANNOUNCED WITH THE NEXT SESSION(S)
noon - 1:30 pm
LUNCH BREAK
1:30 - 1:35 pm
Welcome back/announce winners of short film competition [Helen Tyson]
1:36 - 3:05 pm
Sleeping Giant
2015   drama   1 hr 29 min   14A
While spending the summer at a cottage on the shores of Lake Superior three teenagers test the limits of their experience. [PFF's first "From Away" feature. Ontario director Andrew Cividino's first feature film, which premiered in Cannes in 2015.]
3:05 - 3:25 pm
BREAK
Welcome back and introduction to... [Helen Tyson]
3:30 - 5 pm
Talking About Film   rated G (Maritime Film Classifications guidelines)
A new feature for the PFF. Each year, this selection of film clips, speakers and discussions will explore a currently important topic.
This year: The Drone Revolution
5:00 - 7:15
SUPPER BREAK
[Please Note: The BlackRock Bistro will be open at this time but there is no option for including supper with the weekend pass this year.]
7:15 - 7:20
Welcome back. Introduction to next film [Helen Tyson]
7:20 - 8:50 pm
Closet Monster
2016   drama   1 hr 30 min   rated 14A but mature subject matter
An artistic teenager, haunted by traumatic memories, struggles with feelings about his own identity. [Newfoundland director Stephen Dunn's first feature, about a gay teenager's responses to growing up in a homophobic world. With touches of both horror and coming-of-age films, Closet Monster is - according to The Hollywood Reporter - "an accomplished, courageously strange debut".]
8:50 - 9:10 pm
BREAK
9:10 - 9:15 pm
Introduction to next film [Dillon Garland]
9:15 - 10:45 pm
Afraid to Speak
2016   drama   1 hr 30 min   not rated but mature subject matter
Afraid to Speak is a feature film about Nolan, a young man dealing with depression. Things begin to look up when Nolan runs into an old friend, Ellie, but it's only a matter of time before depression sneaks its way back into Nolan's life. [Shot in Halifax, NS, Afraid to Speak is writer/director Dillon Garland's first feature film.]
10:45 - 11:00 pm
Q&A with writer/director Dillon Garland

Sunday, Oct. 23
9:30 am
Doors open
10:00 - 10:05 am
Welcome and introduction to "How to Make a Film for Free" [Helen Tyson]
*This session is free to everyone, especially aspiring film makers!
10:05 - 10:10 am
Writer/director Gary Blackwood introduces the first feature film, The Seer, and the unusual project that led to its making. Shot in Nova Scotia, for essentially no budget.
10:10 am - 12:02 pm
The Seer
2016   drama   1 hr 52 min  rated 14A (Maritime Film Classifications guidelines)
When her son disappears and no one can help, a desperate mother tries to consult a renowned -- but burnt out -- psychic. This feature-length film was made by actors who gave their time and a Nova Scotia community that gave its support.
12:03 - 12:18 pm
Q&A with Gary Blackwood and other members of the cast and crew of The Seer.
12:18 - 1:45 pm
LUNCH BREAK
1:45 - 1:48 pm
Screen Nova Scotia PSA   2 min 7 sec
1:49 - 1:50 pm
Welcome back and introduction to next film [Helen Tyson]
1:51 - 2:18 pm
Montage: Great Film Composers and the Piano
produced by Ben Proudfoot   documentary/music   B&W   27 minutes   rated G (Maritime Film Classification guidelines)
Six film composers (with a total of 73 Academy Awards between them) create original solo pieces for concert pianist Gloria Cheng.
2:19 - 2:45 pm
With the participation of writer/director Daniel Boos
Bound
drama   11 min   rated PG (Maritime Film Classifications guidelines)
A man queries his brother's sudden wealth ... and its source.  Boos was a youth festival winner at Cannes, 2010.
2:45 - 3:05 pm
BREAK
- concessions available
GATHER BALLOTS FOR AUDIENCE FAVOURITE FEATURE
3:05 - 3:08 pm
Welcome back [Robert More] and introduce Ben Proudfoot's Why This Road: Dan Portelance [Shown on Oprah's Super Soul Sunday, on September 18, 2016.]
3:09 - 3:14
Why This Road: Dan Portelance
produced by Ben Proudfoot   2016   documentary   4 min 36 sec   rated G (Maritime Film Classifications guidelines)
He was the son and grandson of fish fryers in coastal Massachusetts, but Dan Portelance wanted to be a chef.
3:15 - 3:20 pm
Announce Audience Favourite Feature [Lori Lynch] and introduce final piece of film (approx. 20 min)